The SAIC Maxus was able to cash in on its technology and outstanding sales, in 2013, winning more than 10 awards from media and other organizations, and become a leader in the domestic commercial vehicle market. 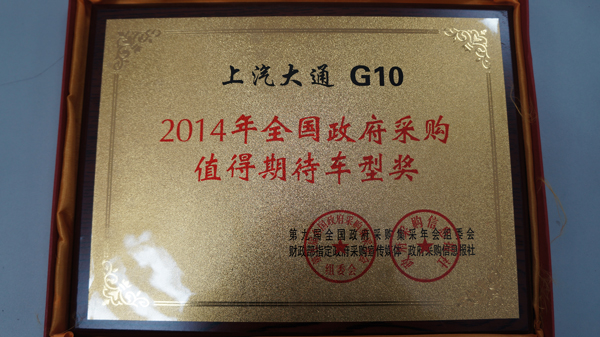 It has a solid reputation among China’s commercial vehicles thanks to its technological advantages and its Maxus V80 has brought it recognition in the industry for its stable chassis, power, emissions controls, and safety. The company’s encouraging sales in 2013 proved its technological edge yet again, with annual sales of the V80 exceeding 10,000 units, in less than three years after its debut. So, winning the technology innovation award for spare parts was a natural.

SAIC Maxus also did well with its government procurements and won consecutive number of related awards, with the V80, for example, gaining recognition as a new vehicle model for civilian use, from the national government procurements office. The Maxus G10, China’s first commercial MVP, won an award for being 2014’s most anticipated national government vehicle thanks to its style, deluxe interior, efficiency, superb chassis, and safety performance.

SAIC Maxus also played an active role in social responsibility and welfare, in 2013, for example by working with the China Lifeline Express Foundation to help cure people suffering from cataracts in poor areas and in starting another welfare project. It has raised its social responsibility to a new level as part of its corporate strategy and provides financial support for these welfare projects. As a result, the foundation gave Maxus a 2013 Lifeline Express contribution award.

Overseas, it won recognition as a highly reliable commercial vehicle in the UK, for its LDV brand, which is sold in the Commonwealth, as part of an activity organized by Motor Trader, the authoritative British automobile magazine. SAIC Maxus also won several newspaper awards in the country.