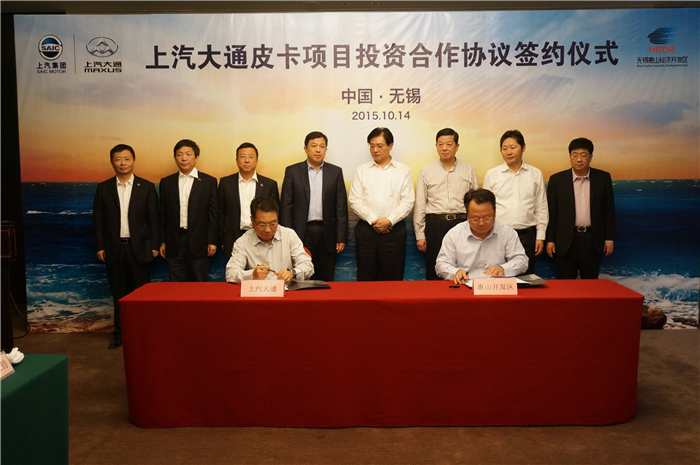 SAIC MAXUS and the Wuxi Huishan Economic Development Zone signed a cooperation agreement on a pickup and SUV project in Wuxi, Jiangsu province on October 14. According to the plans, the company’s pickup and SUV models will likely hit the market in 2017.

The deal covers research and development of new pickup and SUV models, construction of new facilities in its current Wuxi plant as well as some expansion projects.

The move will enable MAXUS to further expand production capacity and optimize its product line in order to sharpen the brand’s competitive edge in different market segments.

The project will also provide a boost to local employment as well as the growth of Wuxi’s economy and automotive industry.

Under the agreement, this year the Wuxi facility will be ready to produce new pickups and SUVs on a shared platform with the V80 van and the G10 MPV, with an estimated annual capacity reaching 200,000 units by 2020. The project will also lay a foundation for customized manufacturing. In addition, the company will improve services such as logistics, packaging and vehicle modification, as part of an effort to turn the Wuxi facility into China’s top production base for commercial vehicles.

So far, the global market for pickups is about 5 million units while in China it is more than 400,000 units.

The MAXUS pickup range has been designed to stand up to up-to-date technological standards adopted by the world’s most advanced pickup models, meet the Euro VI emission requirements and offer users a variety of options: petrol/diesel, automatic/manual transmission, and two/all-wheel drive. Development of the range has been based on European and Australian five-star crash testing criteria for commercial vehicles, with the cutting-edge ESP and six-airbag systems.

The MAXUS pickup range will officially hit the market in 2017, which is expected to boost MAXUS’ overseas sales. The range will also enter the top 20 overseas markets such as the US, Canada and Mexico, as well as entering the 12 markets already tapped by the V80, including Australia, New Zealand, Colombia, the United Arab Emirates, Thailand and Malaysia, in a bid to pursue global development.

On the crossover segment, MAXUS will enhance both MPV and SUV businesses in the future. Under the plans, MAXUS SUV models will debut on the market in 2017. The SUVs are designed mainly for government and police use, with cross-country ability, more seats and larger luggage space compared to their conventional counterparts, and they are also a good choice for consumers with large families. On the whole, MAXUS will adopt a differentiation strategy while developing new SUV models, with the aim of gaining 20 to 30 percent of the SUV market.

As a young commercial vehicle company, MAXUS has maintained rapid growth in the past four years. It has achieved breakthroughs in technology, marketing and branding, made innovations with leading mature technologies and set a variety of industry records, helping it keep its position in the top three of China’s wide-body light buses market. MAXUS is growing from an innovation advocator to industry navigator.