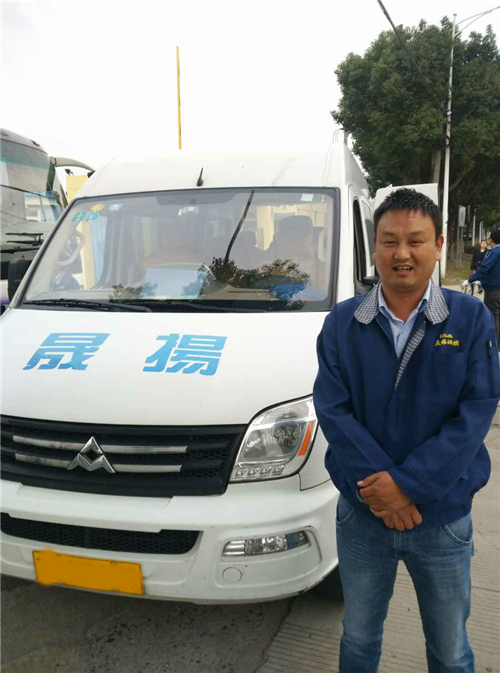 Cao Xiangli is the team leader of a fleet of some 20 cargo vans at Kunshan, Jiangsu-based Shengyang Precision Mold, a subsidiary of Hong Kong-listed Ju Teng International Holdings.

The company, which employs 500 people, produces precision molds and sells products in Jiangsu and also to neighboring Anhui, Zhejiang and Shanghai. The company has expanded in recent years and began to require more up-to-date vehicles for its deliveries.

To meet higher logistics demands, the fleet has gradually phased out its Ford Transit vans and replaced them with SAIC MAXUS V80s, for the latter “are more spacious and fuel efficient, with better motor performance, lower emissions and better quality,” Cao said.

Cao recalled that the fleet began to look for replacements in 2012 when the older vans frequently suffered breakdowns. Back then, MAXUS V80 had just hit the market less than a year before.

“The van looks cool and is a marque owned by SAIC Motor. We Kunshan locals trust SAIC products’ quality, and so we decided to give them a go and bought one,” Cao said. So far, the vehicle has set a record of no overhauls in over three years of service totaling more than 300,000 kilometers, except that it got a new dashboard during a recent maintenance. Two more V80s were added to the fleet later on and the vans became backbones in delivering the company’s mold products.

The V80 is spacious and convenient for cargo loading and offloading. In particular, the rear barn doors open wide enough to accept a standard pallet dropped in at the end of a fork lift. The vans can carry payloads ranging from several hundred kilograms to two to three tons, without compromising its speed, thus helping the company increase efficiency and cut costs.

In addition to the Kunshan plant, the company also has factories in Jiangsu’s Wujiang and Nanjing. The fleet needs to travel back and forth between these facilities. Cao has found that the three V80s can help the company save more than 30,000 yuan in fuel spending as they are more fuel efficient than the Transit vans. Besides, the older vans required cleaning up for their blocked fuel injectors, which cost up to 10,000 yuan a year, while the V80s need none, a benefit from their new-generation engines designed by Italian company VM Motor. With higher fuel efficiency, the engine helps lower fuel and maintenance costs as well as emissions and offers more powerful drive.

Design of the V80 has taken the driver’s comfort into full consideration, such as adjustable driver’s seat and more reasonable and comfortable gearshift design, and also has adopted measures to reduce noises in the van.

According to Cao, their previous Transit vans were able to reach around 120 kph while running on express ways, and the V80 can run much faster, at 160 kph, with less noise.

With outstanding quality, performance and comfortability, MAXUS vans have won praise not only from Cao and his colleagues, but also from enterprises and consumers across the country that have higher demands on cargo vans.