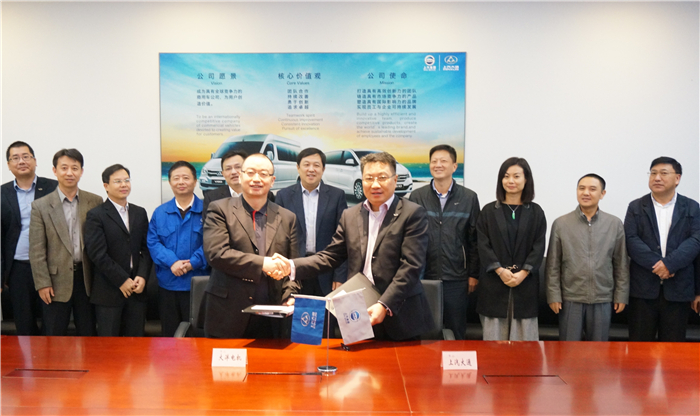 SAIC MAXUS and Zhongshan Broad Ocean Motor Co signed a cooperation agreement in Wuxi, Jiangsu province on November 13. In the deal, Broad Ocean Motor will buy a total of 5,000 MAXUS EV80 pure electrics from 2016 to 2018.

The EV80s will also be gradually released onto the market to meet the needs of the logistics sector in Zhongshan, Guangdong province and help with the city’s energy saving and emission reduction.

Compared with some of its rivals, EV80 is better equipped and has better performance: its drive motor is able to generate peak torque of 350 Nm and the van’s speed can top 150 kph. Multiple safety measures ensure that the vehicles also meet advanced safety standards.

The EV80 range is equipped with continuously variable transmissions, thus offering an excellent driving experience as well as comfort. The van is pollution-free with zero emissions, as its 75kwh battery is able to run up to 370 km on a single charge, the longest driving range in its segment, however requiring a shorter charge time.

Claiming to have the most up-to-date cutting-edge technology and the longest driving range, EV80 has taken the lead in innovation-driven development in China’s pure electric light passenger vehicle segment. In addition, compared with its conventionally-powered counterparts, the model helps users reduce transport spending to a large extent.

Backed by SAIC’s green technology, MAXUS has vowed to accelerate the new energy sector’s development and continue to create more value for its users with high-quality, advanced products.

An increasing number of new energy vehicles are being used to take the place of their fuel-powered predecessors in such fields as logistics, postal services and public transport. Since last May, nearly 300 MAXUS EV80s have been put into operation in Zhongshan, offering citizens green, zero-emission transport solutions, as part of the city’s demonstrative low-carbon program. Statistics show that each EV80 can save about 27 tons of diesel, as well as reduce carbon emissions by 80 tons and PM2.5 by 6.75 billion micrograms, each year. Zhongshan is gradually attaining green public transport and green logistics.